In addition to supporting the M.H.I.C.M. programs at the VA Hospital through cookouts and personal items that they need. The MENTAL HEALTH INTENSIVE CASE MANAGEMENT program is for seriously mentally ill veterans and provides a part of the mental health continuum of care. This includes the veterans that are homeless as well as those at the hospital.

Just as the Elks/Wounded Warrior project assists injured veterans of the conflicts in Iraq and Afghanistan, the Elks' "Army of Hope" assists thefamilies of Military Reservists and the National Guard who have been called to active duty during these times of crisis. The response from members and non-Elks has been overwhelming, and government officials at the local, state and national levels have responded favorably to the initiative.

If you've ever been hospitalized, you know the loneliness and depression you can experience. Think how tough it must be for hospitalized veterans, especially those who are far from home or have no family. With that thought in mind, George Schwarz of Clawson-Troy, Michigan, Lodge devised a simple yet effective solution in 1980: the Adopt-a-Veteran program.

His idea proved so successful that it was picked up by the National Veterans Service Commission in 1983. Each year, Elks Lodges across the nation adopt tens of thousands of veterans. The Elks visited with them on their birthdays and holidays and showered them with gifts and attention. They took those who could leave the medical centers out to dinner, and brought dinner to those who couldn't. Elks provide entertainment, recreation to liven their spirits. The Elks provided these men and women with comfort, companionship, cheer and understanding, and in the process helped lift some of their loneliness.

The object of the Adopt-a-Veteran program is to make the veteran know that they are part of our family , to replace despair with hope, loneliness with fellowship, sadness with joy, and to prove our motto, "So long as there are Veterans, the Benevolent and Protective Order of Elks will never forget them."

If you're an Elk and would like to start a program of your own, or augment an existing program, National Adopt a Veteran Chairman Stewart Israel of Plymouth, MI Lodge No. 1780, has created several informative documents to walk you throug the process. Visit our Adopt-a-Veteran Program page for more information.

Freedom Grants are intended to provide financial support to local Lodges with programs assisting and enhancing the lives of Veterans, the active military and their families. One hundred and twenty-five Freedom Grants of $2,000 each were awarded for 2013-14.

Local Lodge Secretaries or designated grant coordinators were able to submit applications online between August 1 and August 31 of 2013. Over 400 applications were received. A panel of judges selected the best 125 applications based on the programâ€™s expected impact on the lives of the veterans. The level of Lodge involvement was also taken into consideration.

Freedom Grants will be used to clothe, feed and house homeless Veterans and provide necessities, therapeutic equipment and recreation to hospitalized Veterans. Grants will allow Lodges to take Veterans and the local military units on outings, host dinners at the Lodge, hospital or base, and support the active military by shipping care packages overseas.

Our lodge took 40 veterans, their children and grandchildren to see the memorials in D.C. , had lunch and then attended the Washington Nationals vs. the Atlanta Braves baseball game. 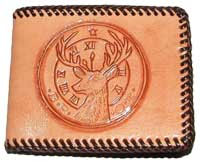 The Elks National Veterans Service Commission is the major source of hides and tanned leather used for recreational and occupational therapy throughout the Veterans Administration health care system. Elks Leather has become a national by-word among veteran patients everywhere.

Time between visits from friends and families can make hospitalization a drudgery for our veterans. Leather provides a form of relief by keeping minds active as well as providing exercise for injured and unused muscles. Veterans often enter wallets, clothing, belts and moccasins in Arts and Crafts shows sponsored by the Elks.

Recently, a program was initiated by Elks whereby tanned leather is cut and sewn into specially designed gloves which are furnished to veterans confined to wheelchairs, thereby protecting their hands during movement.

For the Order of Elks, veterans remembrance is a daily proposition. We never have and never will never forget the sacrifices these heroes made so that we may be free. But it has been a tradition for the Order to redouble its efforts on behalf of veterans in November, not just for Veterans Day, but for the entire month. For the Elks, November is Veterans Remembrance Month.

The Elks National Veterans Service Commission asks all Lodges to run a special event to commemorate Veterans Remembrance Month and to raise funds for the Lodge's Veterans Service Commission. Many Lodges use the proceeds for special events in the VA medical center during the Thanksgiving and Christmas holidays. Some Lodges even invite those veterans who are able to take part in special programs and functions.

Playing Cards for Veterans is a program that goes hand in hand with our Adopt-A-Veteran Program. This activity gives a hospitalized veteran something to do rather than just passively sitting and watching television. Through the hard work of some of our members who have made arrangements with several riverboats and casinos, we are now able to offer playing cards for our hospitalized veterans to use. Each deck of cards is checked to make sure all cards are in good condition and the deck is complete. After the decks are checked, a "Playing Cards For Veterans" sticker with the logo of the Elks National Veterans Service Commission is placed on each deck of cards. These cards are free of charge.

Since 1986, the Elks National Veterans Service Commission has been partners with Re-Creation USA in providing entertainment to our nation's veterans housed in VA medical centers. Re-Creation is a group of young men and women between the ages of 18 and 30 who are all volunteers. They have given up a year or more of their lives to perform this act of love. They travel to all 50 states each year, going from VA medical center to VA medical center, warming the hearts and brightening the lives of hospitalized veterans. And they do so without pay.

As the group tours, local Elks Lodges provide the entertainers (approximately 12 of them) with lodging and a meal before they move on to their next destination.